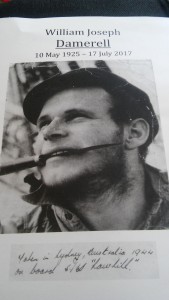 THIS ARTICLE APPEARED IN THE CAPE TIMES ON 26 JULY 2017

“My mother told my father that I had taken girls to bioscope,” Captain Bill Damerell told me during one of my visits to this amazing old salt who passed away last week. “The following Saturday, my father told me to dress smartly in my school uniform, and took me to the Sea Cadet base – the start of my nautical career!” (He was 14 at the time and living in Port Elizabeth.)

On his bicycle, the young Damerell was a frequent visitor to Port Elizabeth harbour, riding on tugs and watching the ships pass, a fascinating time that led the youngster to dream of far-off ports, interesting ships and cargoes – and to head for a two-year stint aboard the training ship General Botha at Simon’s Town.

One afternoon late in 1942, he and a fellow cadet were piped aft to see the training ship’s chief officer. “What ship will you be joining next year, Royal Navy or Lawhill?” he asked the lads. “Lawhill,” they replied, and, at the end of the year, off they went to join the magnificent South African four-masted barque Lawhill that had been taken as a war prize earlier that year after being intercepted by a South African minesweeper near East London.

Although life was tough aboard Lawhill – Damerell lost a finger to a slamming door as the ship rolled in heavy weather off the Cape – her cadets had a superb grounding as they learnt the ways of the sea, in fair weather and foul.

As tough and romantic as his time aboard Lawhill had been, the future lay in motor ships, and, in 1944 with the war still in progress, Damerell joined Selandia, a four-masted Danish motorship that had been captured from its Vichy-French crew in Cape Town to become a South African war prize and that proved useful in transporting troops and equipment from Durban to Suez.

Bill Damerell remembered VE and VJ Day celebrations aboard her the following year, after which Selandia was returned to her owners and called at Cape Town and South American ports en route to New York.

As a newly qualified watchkeeping officer, he joined the trampship Pentridge Hill in Durban whence she carried coal to Colombo, followed by a ballast voyage to Mauritius to load sugar for Beirut. “A beautiful, peaceful city in those days,” Bill recalled. With sugar to discharge and phosphates to load, there would have been time for several lengthy runs ashore – and the beaches were particularly attractive to the young third mate. The rest of the voyage lasted over a year, including a circumnavigation of the globe in the course of her various voyages, an experience that suited this free-spirited man.

He joined Union-Castle whose intermediate liners Llangibby Castle and Dunnottar Castle took Third Mate Damerell around Africa, calling at East African ports, including Lourenco Marques (now Maputo) where, as the ship passed a sandbank in Delagoa Bay, he saw the derelict Lawhill, a tragic, silent shadow of that fine barque that once had the wind in her sails, and a bone in her teeth.

A spell in Union-Castle mailships and his gaining his master’s certificate preceded his joining the harbour service as a dredger mate and later master in East London, rather different to keeping the 12 to 4 watch in Stirling Castle and the mailships’ traditions! The mate on that dredger – a fellow who once had served in tugs in Port Elizabeth – posed a question to Damerell on his first day aboard. “Were you at the Grey in PE?” he asked. “Yes,” responded Bill. “Why do you ask?” “And did you ride on the tugs in your school uniform?” “Frequently. But why the question?” “I was then a deckhand,” the man said, “and the tugmaster told me to make you tea each time!”

I first came across this cheerful, energetic man when I – as he had done in Port Elizabeth years before – thumbed rides on Cape Town harbour tugs. He commanded the old steam tug TS McEwen for several years, and, probably remembering how the Port Elizabeth tugmasters had let him aboard their tugs in his younger days, he immediately welcomed youngsters aboard the old steam tug. “Wonderful tug!” he enthused about that legendary vessel, years later. “Just a touch on the wheel and she responded and she was very good when you wanted engine movements as well – as long as she hadn’t lost her head of steam!”

Later, as a senior pilot, he would often enjoy those Union-Castle traditions again – the four o’clock Friday sailings from Cape Town, or boarding the inward mailship at dawn on Thursdays.

Captain Damerell told me of an occasion when Transvaal Castle was wind-bound in Cape Town. When the wind dropped later that night, he was ordered to sail the mailship immediately. Boarding the liner, he found the fellow ex-General Botha cadet, Captain Norman Lloyd, on the bridge.

“Single up, please,” Damerell asked, and Lloyd passed the command down the mailship’s lengthy pecking order. It took nearly 45 minutes for 38 mooring lines to be winched aboard.  Three tugs pulled the mailship off the berth and down towards M Berth in the Duncan Dock, but, in the delay in casting off, the wind had strengthened again.  “Put her back alongside,” Lloyd instructed Damerell. “Even more dangerous to do that now, Captain!” retorted the pilot. “Full ahead two!” he ordered, and into his walkie-talkie he yelled, “All tugs let go now!”

The mailship trembled as her powerful steam turbines drove her through Duncan Dock’s entrance at 12 knots – to the consternation of Captain Lloyd!

One of Damerell’s most memorable piloting jobs was to sail the Argentine sail training ship Libertad one Sunday afternoon. He boarded the ship earlier than usual and when he explained to the ship’s commanding officer that he intended to sail the ship out of the harbour, and had shared his experiences in Lawhill, the captain agreed. “He sounded quite excited,” Bill Damerell told me years later. From vantage points along the sea front, hundreds of folks watched – I was with many others on Signal Hill – as Libertad came away from the berth, her foresails set to catch the light breeze. She swung around in the breeze and passed through the entrance. A most laudable piece of seamanship that remains one of Dockland’s legends.

He told me that he drew the lot for a special milestone to pilot the first containership to berth in a South African harbour en route from Britain to Australia. “She had all the bells and whistles,” he told me. “A fine ship!”

“I’ve had a wonderful life,” Bill Damerell told me over what would be our last cuppa together at his retirement home in St James. “A wonderfully supportive wife, three wonderful children, and a wonderful career.”

“Your most memorable experience at sea, Captain?” I probed. He needed no prompting. “Standing on the truck (top) of the main mast when Lawhill passed under Sydney Harbour Bridge.”

A giant cedar in local shipping has fallen – and that twinkle in his eye has now faded.

“The Lawhill programme has shown that one can find and nurture maritime talent among those who have no idea such an industry exists, let alone knowing about the exciting careers it offers."